Wolfy, or "My Little Wolf" as his foster mom calls him, is the sweetest cat you'll ever meet! Not a mean bone in his large gray fluffy body! Once he gets to know you and knows he can trust you, it's game over. You are his person, and you are the only one he wants to be with 24/7. He doesn't mind being alone, but when you're home, it's all about you! And him. Together. He has a demanding meow and uses it if he's hungry or wants your attention. Although he demands frequent pets, it's not a problem to acquiesce. He's VERY soft and has the most beautiful fluffy tail! You can scoop him up, hold him like a baby, pull him into your lap, tuck him under the covers with you, whatever. He'll allow it and actually enjoy it.

Wolfy has some anxiety. New sights, sounds or people startle him, and he'll run and hide. At his foster home, he went outside the box for they first two weeks. We do not know if that was because he was genuinely scared or if this was him acting out because he was INFESTED with fleas and it bothered him so badly. To be on the safe side, an adopter will need to prepare for that, perhaps keep him in a bathroom at first until it's verified that he's using his litter appropriately. FCR is starting him on Prozac to see if that will help him be a braver, more confident kitty.

Because of his anxiety, Wolfy does not like other cats. They stress him out, and he feels they are a threat to his home. He would not do well with children. Although he would never act out aggressively, young children playing or stomping will scare him. He does fine with the dog in his foster home. She does not chase, but does get annoyed with his constant affection. She dislikes the fluffy tail in her face all the time.

If you have a quiet home and are looking for a best friend, Wolfy is your guy! 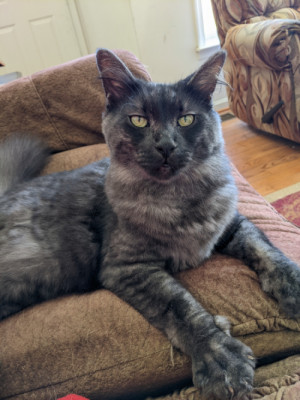 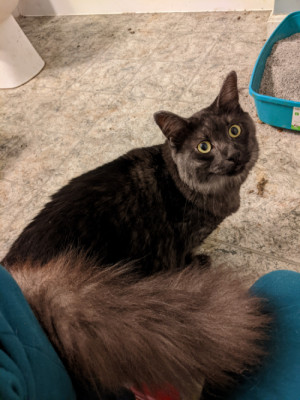 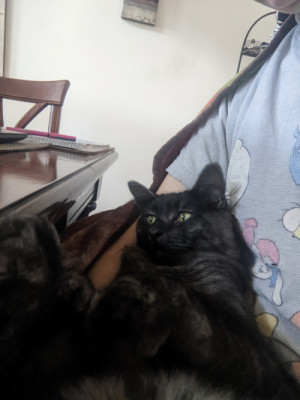