Hi. I am a large, soft, black, awesome ONE-EYED cat named Mikey. As intimidating and fierce as I might appear, I have the vocals of a tiny kitten. Not sure what happened there, but its just another thing that makes me so special. Also, I'm not that sure of myself sometimes. I can tell you that I love to be pet, I like to sit beside you while you work, I love testing out all kinds of new places to sleep and my favorite pastime is to look out the window at night! Not because I want to get away, it's just something I've always done. You'd think having only one eye would hinder my nighttime visionary quests, but I'm well practiced at it and enjoy the challenge.

See, a little background about me will help you to understand, as I've been through a lot for a young man of about three. I was a young cat about the town - running around the woods at night, playing in the drains at day, all while being fed by a nice older man who would sneak out of his apartment building at night to feed me and anyone else who showed up. He did this for months and months and one day he trapped me and Feral Cat Rescue got me to the vet where they said I had a serious eye injury and, well, I became 'one-eyed' after that. The nice man then snuck me into his apartment in the middle of the night because he didn't want me on the streets with one eye. He took care of me and hid me for a while (it was easy to hide because his apartment was quite (crowded). I played along, hiding in the bathroom when the maintenance man made his rounds. Finally I was nursed back to health, loved on, given exquisite foods to eat, and I became a house cat!!! See, this man was like me - a night owl. He slept during the day, so I slept during the day, and we both stayed up at night watching out the window for fun. So, that's what I still like to do.

Now to the sad part of my story. My caretaker passed away unexpectedly this summer in the apartment, and I was very scared. I played the hiding game, and nobody could fine me but they knew I was living there. Someone had taken a photo of me from below while I was looking out the window one night. They tried to trap me but I didn't want to go. One night while watching the outside world I accidentally fell through the screened window from the second story apartment. (Someone left the window ajar so, ...it happens).

Next, I ran around my old haunts for a time, but kept trying to get back inside the building. I was too scared to enter when the door would open though. So instead, a Feral Cat Rescue volunteer trapped me, got me in for my yearly checkup and brought me to her home where I now reside. They call me Mikey, after my old friend. I now spend my days on the sun porch and garage with my new male friend who's helped me to feel secure again and I think I'm ready for adoption now. I'm a little hesitant of big open spaces (my apartment had been (crowded) not much room to move about. I'm used to a very quiet living situation, and I'm shy around women because I only knew Mikey. But I'm a gentle cat, I have soft fur, I have a tiny meow but a big purr motor. I will sit with you and be your companion if you think we would make a good match. I might need an introduction period but I'll be just fine. I would do well with a senior, or a person or two who are pretty mellow. Oh, and I like other cats, too! I hope you made it to the end of my long "tail"; haha!! 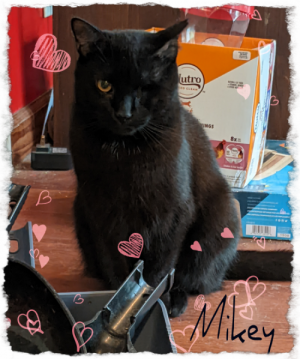